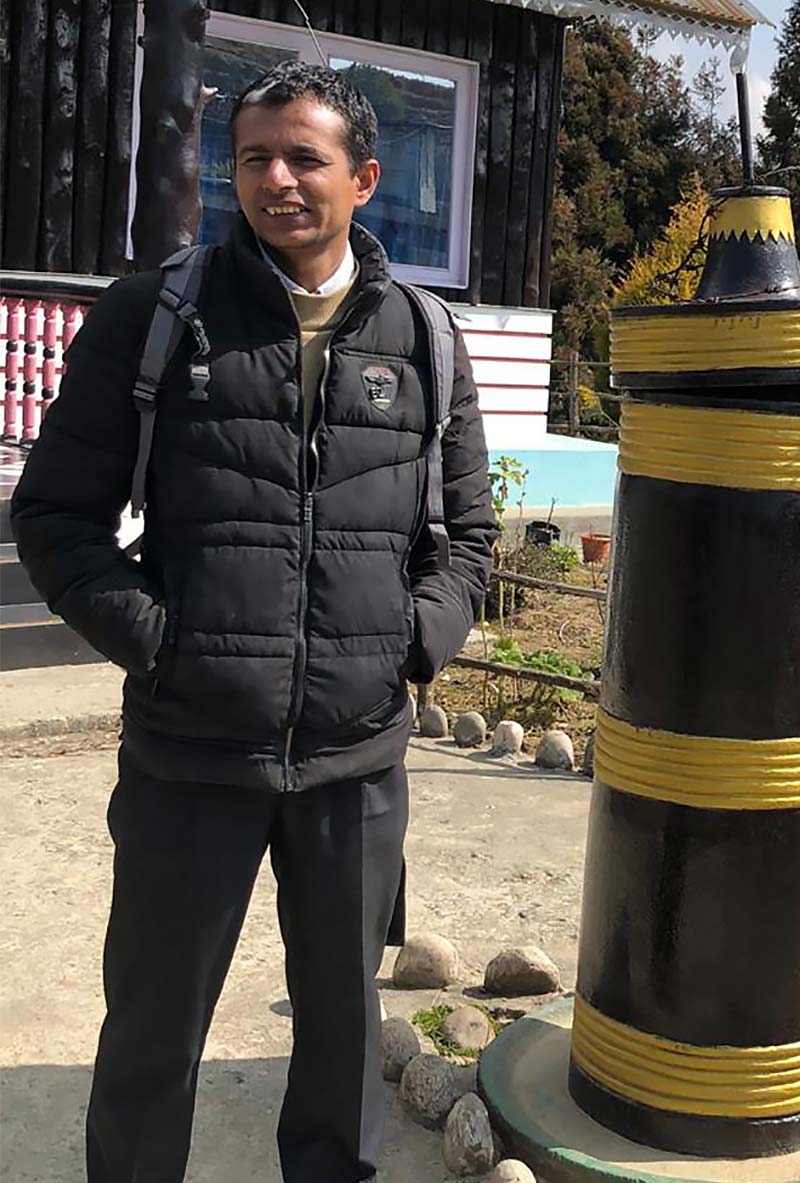 I am Tanka Prasad Bhattarai, son of Padam Prasad and the late Radhika Bhattarai.

I am Thirty – nine years old. I have lived in Hangdewa from my birth. My home address is Phungling Municipality – 9 Hangdewa Taplejung Province No.1 Nepal. I am the person who started the Shree Hangdewa Pathibhara Q. Learning English School. Today I am writing a story about why I started the School.

I was born into a poor family. My parents just did work morning until evening to feed the children. They did not really have enough money to send the children to School, but they worked even harder and sent all seven children to school. I started school at the age of 8. I was a very clever and intelligent student – so all the teachers loved me! I finished my school studies at the age of seventeen in 1st division. After school, I was worried about my further education because, at that time, there was no college that my family could afford. Luckily my dear Kanchha Bau (Small Uncle ) from near Bhadrapur invited me to stay to attend the college there. I wanted to study Science but I could not due to my economic condition. Instead, I studied English Literature, Mathematics and Economics and passed in good position.

Then I thought I would go to Kathmandu to study for my Bachelors degree whilst doing some jobs in the mountains with my cousin, Mr Moti Bhattarai. At that time, in Nepal, there was violence everywhere due to the Maoists, and Nepal was in crisis – and so I could not improve my education there either. After four years, without doing anything valuable, I returned to my own village and a friend encouraged me to join the college in nearby Taplejung for my Bachelor studies. While I was studying there, my mother suffered from kidney failure and, within five month, she passed away. So I decided to stay in the village to be near my father and I started teaching at the government school where I had studied in my childhood. There I felt the laziness and negligence of the teachers towards the children. So I made a plan to run a school which would give children a quality education.

One day, I met my friend Mr. Chandra Maden and informed him of my plan. He agreed with me and we made a start with three other men who were eager to support us. They were the Late. Mr. Durga Patangwa, Mr. Sanjip Subba and Mr. Khadka Labung. We had sought the advice from the villagers and they were pleased with our work and encouraged us. We started the school in a typical rented, wooden house. We had one hundred and five students and just four teachers. Then we carried out the legal process with the government and got the school’s legal certificate on 17th Sep. 2007.

Every day, I worried about how to improve the school and make the best school for the children because we had a lot of children in cozy but small rooms and no playground. We were running the school in such difficult circumstances. One day, I told my cousin, Moti Dai, about the school and he promised to help me. I continued to worry as I waited for help from Moti Dai. By God, whilst trekking, he met Lesley Didi and convinced her to help his villagers in such a remote area of Nepal. Lesley Didi became excited about it and made a plan to visit our village. All the villagers were very pleased to learn of that. And, sure enough, one day, while we were teaching our children at nearly one o’clock, a group of tourists arrived with Moti and his friend Apple and started to look around our school and the children. We felt very proud to see them. And a few minute later they came further into the village to see where a proper school could be built. And there was our great heart, Lesley Didi, too.

In the evening, when I returned from teaching, the whole village were in the fields searching for the right place for the school. But none of the villagers not were willing to give up their fields without being given money and they asked a high price for the land too. When we turned back toward my house, I showed some land for the school and said there was no need to pay anything for the land – we just needed help to build the school. Next day, we called a huge meeting of the villagers where 167 attended. They made a committee of nine members and wrote a legal contract to construct the school with the money from England.

At that time, all the money and proof of work were done from Kathmandu because there was no internet. We just did the work – we cleared the ground for the school and handed over the construction work to Khadka. He did the work slowly due to lack of sufficient money and materials. He continued for two years and then Moti Dai and Apple told us there was no money. Then the committee totally stopped the work. Meantime, Apple had told Lesley Didi a lie, “We are running the school in the new building. So Lesley Didi sent her son Edward and his friend Harry as volunteers to teach here. But the school was empty. They told me a sad story of their travel from Kathmandu to Taplejung. Their guide, Apple, said they were nearly at Tapljung but, because of a landslide they must walk the last few minutes. They walked day and night until Ed and Harry saw a house nearby and went there and knocked at the door themselves. All the family came out to see them and were surprised to see foreigners, and kindly asked them in for food. The three men slept outside and early in the morning they walked toward Taplejung. It still took another four hours. When I listened to this story from Ed and Harry my eyes were full of tears. I still miss them a lot even now, years later.

We decided to repair the building ourselves. And from 20 April 2011 we started the school where it is now. In the same year, we got our best teachers: a couple, Manoj and Rosalia from Sikkim. But we still had money crises and Mr.Chandra left the School due to family problems and went to Qatar. Mr. Khadka started to teach at the Government School and so it was just Manoj, Rosalia and me left to run the school and we had no money for proper salaries for the teachers. I served two years without a salary. I was incredibly worried and sometimes thought about stopping the School. Although I thought about Lesley Didi, I had no way of contacting her and Moti Dai and Apple did not wish to give me her details. Then I asked my cousin, Anil, and he gave them to me. I explained everything to Manoj and together we went to Taplejung for the internet and started to write about the school.

Lesley Didi immediately visited Hangdewa and we had a chance to welcome her and her group, including Karen, Dave and their two little sons. The guide was Apple. We made a plan to do the work to complete the building. First, we wanted to fix the doors and windows. Secondly, needed clean, drinking water, Thirdly, we talked about computers. Fourthly, a playground, and last was building a top floor. The children were not wearing school uniforms and Lesley Didi paid me enough money for all. Even the two boys gave their money for play materials to the guide. But it was lost.

Lesley Didi went back to England and sent the money to Apple to start the work. It was 800,000 NPRs (£5,600) but Apple would not receive our phone calls – he lost all that money too and even today is not in contact with us. Then, very fearfully, Manoj and I again emailed Lesley Didi. And we swore to Lesley Didi that we had never done anything wrong. Then she agreed to restart the work on the school. Manoj and I were more and more excited as we talked on the way back! Very quickly, we did all the work as agreed and while we were doing the top floor job, Lesley Didi and her husband Jim visited with a friend, a Nigerian lady. After seeing our work, Jim and Lesley Didi encouraged us to finish the job even though we needed 3,250,000 to complete it all. At last we had a ten roomed, big building and Lesley Didi was so kind that she gave proper salaries for all the ten teachers depending on performance: we categorized the teachers three ways *1*,*2* and *3* – and each year increasing them by 5 – 20 % until now. So we have a huge appreciation of her.
Volunteers started to arrive and shared the lifestyle of Nepali people – some taught in the school and some raised money for us. A couple from New Zealand, Laurie and Pauline Bennett, came with Moti Dai and we made a celebration for them with garlands at the big yellow school. Afterwards, as they trekked to Kanchenjunga base camp, Moti Dai talked more about the school and gave them Lesley Didi’s contact details. They have supported us every year since and have paid money for the children’s books and uniforms as well as helping with resources and building work such as new toilets. Perhaps one of the biggest changes was when Tom Crawford sent us out computers and Shamica, Michel and Arina came out to network them and fix up the internet. So they too are all in our heart.

From 2013 to 2017 we did all the work from my personal account. The money came to my account and we used it as agreed with Lesley Didi. But then I was frightened and thought it was not right – so I asked Moti Dai to help set up a charitable organization and with help from his brother, Sujan, the Q. Learning Trust Nepal was established. Then Lesley Didi said we should build a separate school for the little children and the Q. Learning Trust bought some land from Mr. Devendra who gave an equal amount of land freely for the trust. So we used 3,050,000 NPR to complete the new school and she decided to give Montessori training to our two teachers Rosalia and Dhanmaya. They went Kathmandu for training with Manoj (who looked after their toddler daughter). In 2018 we did it all.

Then Lesley Didi came to commission a guest house next to the Montessori School. Didi drew a diagram of the house and Khadka Labung built the house in five months. And when Didi and Jim came back, we opened the Kanchanjungha Villa and later we enjoyed some delicious food prepared by Lesley Didi UK style.

Now the world is suffering from the Corona virus and we too are affected by it. Lesley Didi is concerned about the schools, children, teachers and also the villagers. She is continually busy for us. Now she has a Trust Board team in the UK to help the school, called the Q. Learning Nepal Trust CIO. If Lesley Didi had not helped me all those years ago, I would have stopped the school and gone to Qatar, Malaysia or UAE for the money. So Lesley Didi is like my mother, I will never hurt her and my heart is always with her. Now we have to improve year by year, especially the use of the English language by the teachers and students. There is still much to do. We will do whatever it takes and make the best school that we can.